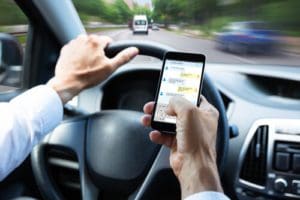 Life can be changed in the blink of an eye when tragedy strikes in the form of a car accident. All too often, a car “accident” is actually the result of another driver’s negligence.

For example, someone who drives while distracted can cause a catastrophic accident that leaves victims with physical, emotional and financial damage.

The Western North Carolina car accident lawyer at The Elmore and Smith Law Firm, PC understands how a distracted driving accident can dramatically affect the life of a victim and the victim’s family.

That is why we are committed to working to ensure that car accident victims are fully and fairly compensated for all of their injuries.

If you have been injured in what you believe was a distracted driving accident, or if you have lost a loved one as a result of one, you could be entitled to compensation for your injuries or your loss

For more than 30 years, the Western North Carolina car accident attorney at The Elmore and Smith Law Firm, PC has fought for those who have been injured or killed in car crashes. We are based in Asheville, but we accept auto injury cases and auto wrongful death cases throughout Western North Carolina, including Hendersonville, Waynesville, Marion, and Rutherfordton.

Call 828-367-7998 or use this contact form for a free and confidential evaluation of your case today.

Although there is no universal definition, the concept of “distracted driving” remains the same for all definitions. Anything that takes a driver’s hands off the wheel, eyes off the road, mind away from the task of driving, or that otherwise prevents a driver from hearing sounds outside the vehicle or recognizing a potential danger can be considered a distraction. If any of these conditions exist, then someone could be considered a distracted driver.

Some common forms of distracted driving include:

Distracted Driving Is A Serious Problem

While distracted driving has always been a concern on North Carolina roads, it has become a more frequent cause of accidents over the last decade with the increased use of cell phones and other handheld electronic devices. According to the North Carolina Department of Transportation, “inattention” contributed to 10.8 percent of all crashes in 2009. Of those crashes, 130 resulted in fatal injuries.

Statistics released by the National Highway Traffic Safety Administration (NHTSA) show that almost 20 percent of all injury crashes throughout the United States in 2010 listed distracted driving as a contributing factor in the collision. NHTSA data also reveal that more than 3,000 fatalities that year were caused, at least in part, by a distracted driver.

A recent survey showed that 40 percent of all teenage respondents admitted that they had been in a vehicle with a driver who was using a cell phone in a manner that endangered the occupants of the vehicle, as well as others on the road. The survey results highlight the increased risk of distracted driving accidents for young drivers who are both more likely to use a cell phone while driving and less prepared to handle a potential hazard while driving.

Distracted drivers pose a danger to everyone who travels North Carolina’s roads. A text message, phone call, quick snack, or in-car conversation could cost a life. It only takes a split second of distraction to cause a catastrophic collision that can forever change the lives of the victims and their families.

Call For A Free Consultation With A Western N.C. Car Accident Lawyer

If you have been injured in an accident that was caused by another motorist’s distraction, you could be entitled to compensation for your injuries. Contact the Asheville and Western North Carolina car accident lawyer at The Elmore and Smith Law Firm, PC at 828-367-7998 or use this online form. You will speak with a dedicated North Carolina distracted driving accident attorney who has years of experience helping car crash victims just like you. There is no charge for the consultation and no obligation whatsoever.